For all of those of you who love Star Wars and are starving for the new Force Awakens film to come out, you hunger will be fully satisfied in the meantime with this Force Awakens Fan Film!  The YouTube channel Fuzzy Puppet, which is produced by a South Florida native filmmaker, does toy reviews for kids and has done a fantastic job of producing a Hollywood movie style Star Wars film for kids!  In this video, Fuz The Puppet utilizes the Star Wars Force Awakens 6” Black Series action figures and stop motion animation to tell a pretty complete story!  IN this short movie, the First Order (the new name for The Empire) has captured Rey’s droid Fuzzy8 (BB8) and she is on a quest with Chewbacca & Finn to rescue the robot!  Along the way they must also helpthe resistence save some diamonds before The Finalizer Ship (the name of the new Death Star) takes them!  The effects are really quite amazing!   Right from the first scene you will feel like you are watching a legit Star Wars film! 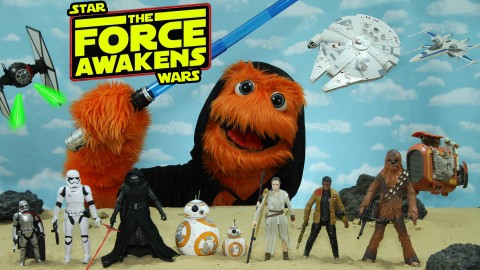 FuzzyPuppet also does a series of other great videos including one with The World’s Largest Minion Surprise Egg which alread has over a million views in less than a month!  Again the quality seen in these videos is unlike anything else you will see in the youtube toy category!  The channel utilizes stop motion photography to move the toys along with green screen and computer animation as well as many other techniques I’m sure.  That stop motion must take forever!

The star of the show is a puppet named Fuz and he is really funny!  He is 100% child friendly and grown ups will find him entertaining as well.  I think this youtube show is appealing to both children and adult because most of the time children are watching these videos with their parents so the film makers obviously keep this in mind when making each video.  The channel also gives out prizes like free toys and tshirts to fans that share their videos on Facebook and Twitter.

So if you can’t wait for Star Wars The Force Awakens and the trailer isn’t enough, make sure to check out this great video.  And don’t forget to subscribe while you are there!